While Germany is trying to build up hydrogen partnership with Russia, and while Russia is pushing for stronger measures to protect climate and environment, the country’s oil and gas industry faces accidents with serious environmental impact on a regular basis. The oil and gas business, which has been notoriously non-transparent for decades, can now be seen a little more open to the public. This is what the studies held by WWF Russia and Creon Group say. Creon, the investment and advisory company, sees a growing transparency trend in the oil and gas connected with the decarbonisation efforts of the EU. 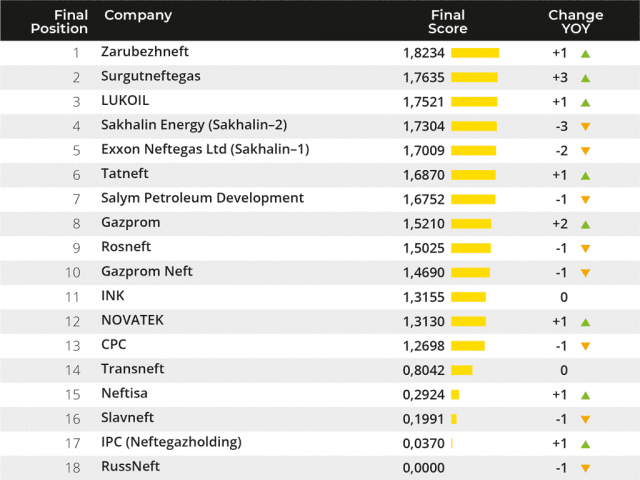 This year’s environmental transparency ranking of 18 largest oil and gas producers in Russia shows a positive trend in disclosing environmental damage information, as WWF and Creon announced on Friday. Moreover, the leaders in the rating have entered a fierce competition to win the top rankings.

Zarubezhneft won the first place in the ranking, followed by Surgutneftegaz, Lukoil, Sakhalin Energy and Exxon Neftegas. The two largest producers, Gazprom and Rosneft, became eighth and ninth, accordingly. Gazprom’s rating has improved the most, moving the company up two lines. The Russian-German joint venture Achimgaz with the participation of Wintershall Dea and Gazprom was not rated. According to Creon, the rating calculation takes into account the impact on air, water, soil and ecology, as well as the environmental management of the companies and their willingness to disclose relevant data.

Deputy Head of the EU Delegation in Russia, Aleska Simkic, commented that “a new generation of corporate reporting that takes environmental risks to heart” is important for investor confidence. Creon founder Fares Kilzie said the rating results documented that Russian companies understood and accepted the importance of the energy transition in Europe.

We use cookies on our website to give you the most relevant experience by remembering your preferences and repeat visits. By clicking “Accept”, you consent to the use of all the cookies.
Cookie settingsACCEPT
Manage consent

This website uses cookies to improve your experience while you navigate through the website. Out of these, the cookies that are categorized as necessary are stored on your browser as they are essential for the working of basic functionalities of the website. We also use third-party cookies that help us analyze and understand how you use this website. These cookies will be stored in your browser only with your consent. You also have the option to opt-out of these cookies. But opting out of some of these cookies may affect your browsing experience.
Necessary Always Enabled

Any cookies that may not be particularly necessary for the website to function and is used specifically to collect user personal data via analytics, ads, other embedded contents are termed as non-necessary cookies. It is mandatory to procure user consent prior to running these cookies on your website.