JSW Steel Italy announced the signing of an agreement with Creon Capital with the aim of developing the renewable energy, LNG, logistics and related industrial activities in the area of Piombino port. On September 15th, JSW Steel presented the Piombino 2030 Industrial Plan.

The new industrial plan for JSW Steel Group’s Italian companies, known as Piombino 2030, was presented on September, 15th at the JSW Steel Italy headquarters in Piombino. JSW Steel Italy’s Vice-President, Marco Carrai, the Undersecretary for Economic Development, Alessia Morani, the President of the Tuscany Region, Enrico Rossi, and the Mayor of Piombino, Francesco Ferrari, were present at the event. 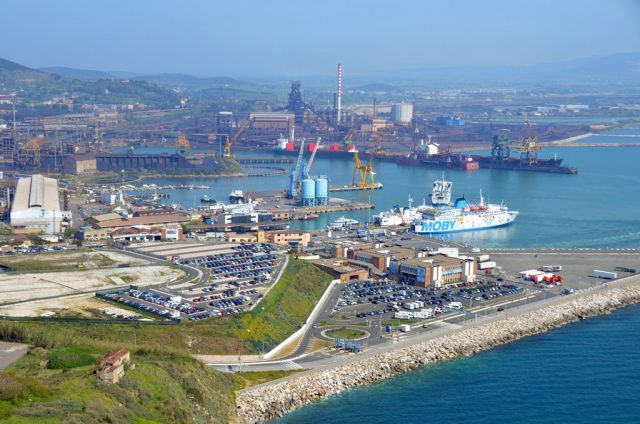 Other participants were the Social Partners, representatives of the Province, of the Ministry of the Environment, of the Ministry of Labour, Invitalia, the Upper Tyrrhenian Sea Port System Authorities and the State Property Office. The meeting was also attended by all the financial partners involved in the industrial plan.

The industrial plan, which envisages an initial investment of 84 million euro thanks also to the participation of Invitalia, as announced in the same office by the Undersecretary for Economic Development Alessia Morani, is divided into two phases: the first, in the short term, aims to make the rolling plants more efficient, complete the product range and bring the company to satisfactory profitability. The second phase, in the medium term, targets over the next five years the return to steel production through the use of the electric furnace and the construction of a multicentric industrial complex that also includes logistics, manufacturing and environment activities to be carried out with selected partners in the individual sectors and financials.

“We are proud to present the business plan today, even in a difficult economic situation. I would like to thank all those present here for making this relaunch a reality” – said Marco Carrai, Executive Vice President JSW Steel Italy – “Invitalia, as announced today by the Undersecretary for Economic Development Alessia Morani, will support this first phase, aiming to relaunch the company and make it productive again. We hope that Piombino will once again become a key industrial place, starting from our core business, steel, and safeguarding all jobs”.

“We had made a commitment and respected it. For some months now I have been following the dispute with Minister Patuanelli. The first commitment we had made was the possibility for the State to enter the capital of JSW Piombino and this will be achieved in the coming weeks through Invitalia, which will enter with 30 million euros” – said the Undersecretary for Economic Development Alessia Morani – “The second commitment was on a regulatory level and took shape last week, with the approval of the simplification decree, regarding the rail orders for the Piombino factory, thanks to which we created the ideal conditions ensuring a continuity that guarantees economic peace of mind for the company and, of course, for the workers. I believe that the policy must be done in the following way: for commitments and concrete results. On the 24th there will be a meeting at Mise to update the addendum that necessarily follows the approval of the industrial plan. With Jindal, all the institutional partners and with the help of the trade union, we hope to guarantee a future for this factory, which is the heart of the city, as soon as possible”.

In recent weeks, JSW Steel Italy announced the signing of an agreement with Creon Capital with the aim of developing the renewable energy, LNG, logistics and related industrial activities in the area of Piombino port and the start of a dialogue with the ship builder Fincantieri to assess the possibility of allocating some areas within the Piombino industrial site to shipbuilding activities and large reinforced concrete cellular modules for maritime infrastructure.

JSW Steel Italy Piombino S.p.a., Piombino Logistics S.p.a. e G.S.I. Lucchini S.p.a. are part of the diversified JSW Group in India, which has a leading presence in sectors such as steel, energy, infrastructure, cement, sports, among others. Today, JSW Steel Ltd. is one of the leading integrated steel companies in India with an installed capacity of 18 MTPA.

See details on the CREON Capital

See details on the JSW Steel

We use cookies on our website to give you the most relevant experience by remembering your preferences and repeat visits. By clicking “Accept”, you consent to the use of all the cookies.
Cookie settingsACCEPT
Manage consent

This website uses cookies to improve your experience while you navigate through the website. Out of these, the cookies that are categorized as necessary are stored on your browser as they are essential for the working of basic functionalities of the website. We also use third-party cookies that help us analyze and understand how you use this website. These cookies will be stored in your browser only with your consent. You also have the option to opt-out of these cookies. But opting out of some of these cookies may affect your browsing experience.
Necessary Always Enabled

Any cookies that may not be particularly necessary for the website to function and is used specifically to collect user personal data via analytics, ads, other embedded contents are termed as non-necessary cookies. It is mandatory to procure user consent prior to running these cookies on your website.